Two days of sun at last – everything with leaves and roots seems to be playing catch-up; buttercups and daisies proliferate, dandelions are madly telling us the time with their clocks, and in London the streets are bursting with a glut of lilacs, lavenders, blues, cobalts and purples. Wisteria looks particularly lovely against a soft grey brick wall. And the peonies – gracious yellow flowering trees up in a Cotswold garden, and lush carmine beauties blooming round the corner from me. 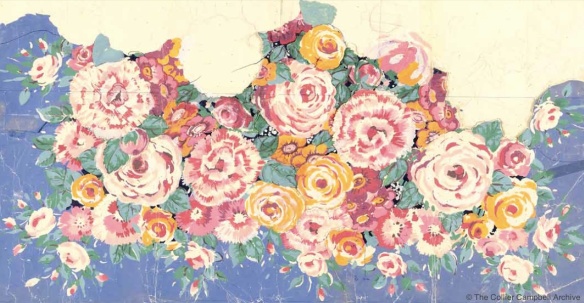 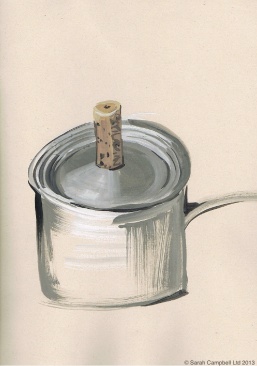 The aftermath of moving has resulted in much finding and losing – or losing track of at any rate. My favourite saucepan lid, old, battered went missing. I particularly like it for 2 reasons – being more or less flat it’s designed to fit almost every pan I have, and  long ago I replaced its broken plastic handle by screwing in a cork (a hint from Granny C) – so I never burn myself in my rushing ways. She wedged corks in the handles of all her pans.

Happily I’ve just unearthed it – no others were quite useful enough. Having set myself the goal of working through two boxes a day from now on I’m re-meeting all sorts of things – even after only a month in hiding they seem like long-lost treasure. I still use haberdashery from that same Granny’s stash – a little tin houses a hoard of pearly buttons – and her reels of silk thread and spare lace collars might come in useful yet. 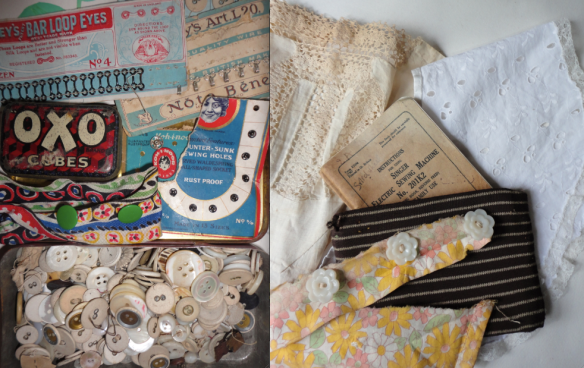 Recently, when talking about my working life, I heard myself describing the much greater losses – personal and professional – which occurred in rather quick succession during 2011 (my sister, our studio, the name we’d founded and built up together). In the words of Lady Bracknell that could look like carelessness.

But now I’m finding quite a new way of being and working which I love – and the audiences at Livingstone Studio and both the Stroud International Textiles talks were magnificently encouraging and affectionate. Thank you!

The paintings will be on sale concurrently with Livingstone’s The Colours of Summer collection until the end of June.

Rebuilding on the ruins of sadness has its own sensitivities; being able to put a lifetime’s experiences to good use in going forward is a recompense – a proper reflection of the past, a fortunate harvest.

I can’t deny that it’s fun to talk about work and show off a bit – and one of the most fun-some things I did earlier in the year was to take part in a fashion shoot for the charity TRAID. They’re great upcyclers and TRAIDremade is particularly imaginative in the re-assignment of say a hundred surplus-to-requirements tee-shirts, or an odd Collier Campbell Archive vintage curtain. Here I am in an interesting assortment of their vêtements looking particularly glam – zippedy-doo-dah!

Today marks the sixtieth anniversary of the first ascent of Mount Everest, the Great Mother as it’s known locally. The news arrived on Coronation day, the 2nd of June, which seemed to me as a child to be an unbelievably magical coincidence. ‘Sheer folly’ was how Edmund Hillary later laughingly described the venture. My absolute hero for years was Sherpa Tiger Tenzing – I think I fell in love with his name as well as his smiling modest face.

In 1986 I seized a surprising opportunity to fly up to Tibet from Chengdu – when I arrived at the stony desert airstrip outside Lhasa the thin clear air gave the colours an exhilarating intensity which I can still feel today. And there were the sherpas bounding about in that rarified atmosphere carrying huge bundles on their backs anchored by straps around their foreheads. Those few strange days were some of the most important of my life.

I’m waiting to open the box containing the quilted window blind and valance I brought home 27 years ago.

These five little A5 prints of favourite blog paintings, each on thick cartridge and signed, are now available – including p&p they’re £30 each and £120 for the set of five. They’re not in my online shop yet so if you’re interested please ping the contact button and let me know.

Thanks to Alan and Molly as ever!