This is the time of year for trees. Thomas Hardy’s novel ‘Under the Greenwood Tree’ begins on a dark Christmas eve night,

and the first paragraph, which I’ve quoted before, describes the individual sounds made by the different trees stirring in the wind:

To dwellers in a wood almost every species of tree has its voice as well as its feature.  At the passing of the breeze the fir-trees sob and moan no less distinctly than they rock; the holly whistles as it battles with itself; the ash hisses amid its quiverings; the beech rustles while its flat boughs rise and fall.  And winter, which modifies the note of such trees as shed their leaves, does not destroy its individuality. 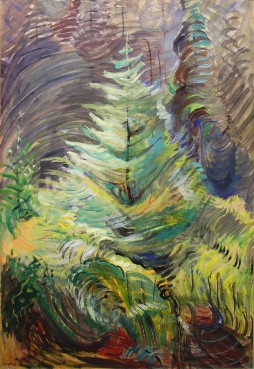 Much of the artist Emily Carr’s work is concerned with trees. Born in Western Canada in 1871 she spent her life compelled by her passion to draw and paint. Her first works recorded the lives and artefacts of First Nations people of British Columbia – beautifully drawn and coloured. 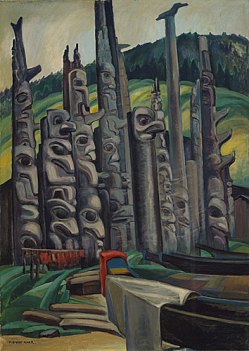 Beset by poverty and feelings of isolation, despair and rejection she stopped working for a while; then, encouraged by artists in the Group of Seven she took up her brushes again, walked into the woods and painted what she saw and felt in the forests around her. Her concerns were all about colour and movement – “without movement we are dead” – and she immersed herself in the great growing grandeur of the trees. Her paintings are powerful inventions; her personal journal notes tell the story of her singular determination – she is very present in the current exhibition at the Dulwich Picture Gallery.

In an attempt at community celebrations we decided to put up a tree in the lobby of our block of flats. My neighbour suggested we invite all the children to come and make decorations to hang on the tree, so a workshop was duly advertised for a saturday, tables and chairs carried downstairs, and my studio cupboard raided for glitter, glue, paper, pens, scissors and string.

A very happy sticky time was had, despite the freezing cold foyer, and soon stars, fairies, aliens and co were dangling amongst the branches, along with some donated decorations which included a group of particularly fetching little red and white knitted figures. The children were excited, in fact we were all excited, and felt cohesed and optimistic.

Then something sad and incomprehensible happened – that very same evening the knitted decorations were all stolen. We put up a notice but they never reappeared:

Happily the original donor quietly brought some gold and silver balls and tinsel and very kindly re-dressed the branches – but what a miserable thing to do, eh? 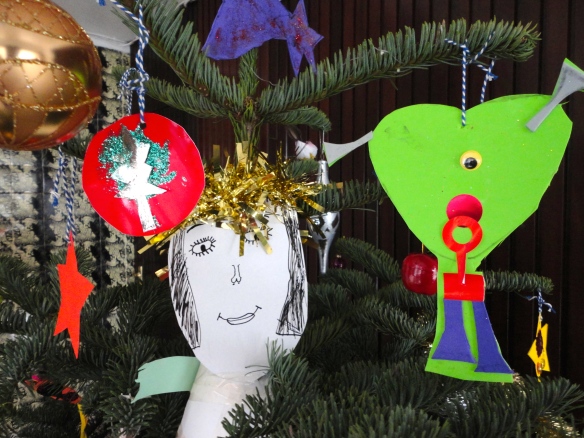 I love my fountain pen, it’s my trusty companion. So I was delighted when the people at Pen Heaven told me about their plans for an ‘ideas for home-made Christmas cards’ blog and invited me to contribute to the series. Of course I said yes, and soon set about turning half a plain sheet of A3 cartridge into an easily cut-out and pasted patterned Christmas tree card. Read the steps and see the finished card here – good luck!

Last August a group of schoolgirls at the Assunta School in Malaysia were also invited to design Christmas cards. These particular students are supported by the Harinder Veriah Trust, which provides uniform, stationery, hot meals and some extra tuition for about 52 of the poorest girls in the junior school. They sent the designs to the Trustees, and at a fund-raising supper recently I was asked to comment on them, and think of how best to use them to make products that can be sold to raise money for the Trust.

I like these photos of some of the girls smiling with their work. I am impressed by how they had all approached their sheets of paper so boldly, and with what gusto they’d tackled drawing a subject which had little place in their own daily lives – christmas, snow, presents. Many thanks and congratulations to the artists and their tutors. If you agree that girls are worth educating it’s a Trust well worth supporting: for a relatively modest amount of money our end a lot can be provided theirs.

Another invitation I received was to decorate the rather extensive windows of our lovely local interiors shop Do South, here in SE19. Having decided that white poster paint, not Windolene, was the appropriate medium, I drew a little sketch, gathered my brushes and began. It was something of an experiment – I don’t think I’d ever tackled such a thing before – either in its scale or nature!

Anyway I really enjoyed myself as the snowflakes began to appear and scatter across the glass. I moved on to faux curtains with a holly design on another window, and finished the job with an abstract pattern to frame the beaded African heads and wooden figures round the corner. I bagsy not to be the one who has to wash them clean on twelfth night though! 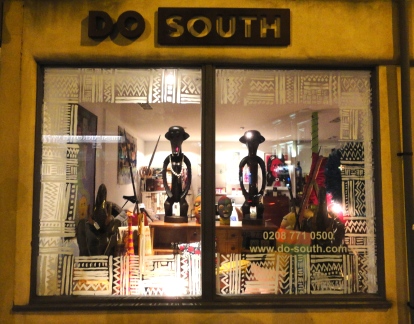 It was great to see familiar old friends, both human and fabric, at Joss Graham’s special evening, and then to have a morning coffee with a new-ish one too – Jennefer Penfold, who travels Europe searching for interesting textile sources and retailers. She produces a blog and the neatest little books with her findings. We exchanged textile talk, shopping ideas, fabric jabber, ribbon ravings – lovely!

The new wool ‘Celebration’ scarf has been a spectacular success; nearly all the first (little) edition sold straight away and more stock is arriving as I write, plus further designs too… and there’s still time to order a 2015 calendar, with its special-day stickers, for patterns a-plenty in a happy new year.

So Merry Christmas one and all – see you in….

thanks to Molly, Steve and Fred.

And goodbye to Jane Bowen, photographer