This supremely co-ordinated couple hurried across my line of vision the other day. I was on the way home from the chandlery shop in Monmouth Street, and it had already been a colourful outing. Investigations into nylon fishing line and beyond stemmed from my plans for the new ArtRoom exhibition. This year an ambitious collaboration with Selfridges involves the installation of dozens of chairs to hang in their Atrium ready for the fund-raising auction during May.

Not so long ago a pal in the upholstery business was pointing out the salient points of a particular chair – arms, legs, seat etc – and as he spoke the chair jumped up, waved its arms about, wiggled its seat and danced a jig – right there in front of us! At least I think it did…

So when the Ernest Race BA2 chair arrived the other day, ready for Re-work It: Chairs for The Art Room, it was easy to know what to do; but not so easy to know how to do it.

Chairs suspended in mid-air above customers – serious thought was needed as to the safety of my solution; taking it apart was one thing – my plan for re-constituting her required a level of expertise way above my kitchen-table methods. So that’s what took me and my sketch to Arthur Beale’s, where I was introduced to the two magic words ‘theatrical chandlery’ – as supplied by their sister company Flints and Co. As we mulled over the possibilities (come back Monday and see Alasdair was the answer) an imposing gent displaying a bright blue coxcomb and quite a lot of metalwork entered seeking a Speedy Sew kit.

I had to ask him why: “My acrobat gaiters need attention.” came the answer. (The kit comprises an awl gismo for sewing leather.) And when he’s not flying on the trapeze or somersaulting through the air, he’s breathing fire with The London Fire Spinners – and was doing so that very friday evening down on the Thames beach.

I did go back on monday, with my chair – now six pieces in a big blue bag. And I did meet with the very sporting Alasdair, and together we worked out how she could hang amongst her peers, with all her wires, shackles, rings and joints certifiably safe.

By thursday evening the doc had re-made the patient and home she came for her costume fittings. There is something of the flying circus about her – perhaps influenced by Mr BlueBrush!

A little round Indian cushion seemed perfect for her head, but is old and rather worn out. I needed to mend the appliqué. I realised I had just the thing. Heaven knows I’m not short of cloth here, but last week two big heavy boxes from America arrived at the door. Inside were new fabrics, and this little dot is just right to give the hint of eyes on the replacement patches! I just need to finish her necklace made with all the redundant screws, nuts and bolts and she’ll be pretty well ready to go and hang around in Selfridges for a bit, looked at from all angles. I hope she raises a tidy sum for The ArtRoom charity as she moves on to a good home and a useful life – she’s become Madam Chair after all.

And those two boxes in the hall? I hinted at the contents in my last blog – and now I can show off our new range, ‘Melodies’, produced with the US company Michael Miller Fabrics. Birds, leaves, spots and dots, geos, diamonds and scatterments – printed on 100% cotton they’re designed for home sewing, quilting and patching and will be available for shipping worldwide on June 29th. The ten patterns sit together in two strong colour groups, Tropics and Jewels, and have a merry folk-art feeling about them. So get your scissors, pins and needles out.

If you’re keen to explore painting patterns yourself, come and join me at a workshop – here’s a reminder of when and where I’ll be teaching, starting with Mexico on April 29th! Hard to Find, Morley College, Bradness Gallery and West Dean are all on the list – click here for more details on our news page. I think some of these later courses are not yet bookable online, but will be available soon. And for very local readers, I’m invited to give a talk at the SE London Womens Institute, one evening at the start of October – more details later.

I’m pleased to say that the Habitat 50 Leaves rug is now back in the London stores, its manufacture much improved, and I think will re-appear on-line as well. Our Calico Birds cushions have been taking the air recently too – in the current May issues of House Beautiful and Period Living. 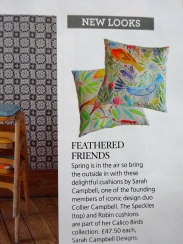 A lot of readers showed very kind concern for my sister-in-law after her wretched accident; I’m pleased to say she’s making marvellous strides – literally – as you can read here. Volvo have developed a very smart reflective paint spray for hi-viz cycling in the dark – I don’t know that it would have altered anything in her case, but it certainly looks effective for dusk and night-time rides. For my own limbs I’m happy to be able to practice neighbourly Tai Chi; we manage to meet most mornings and stretch our minds and bodies – hard work with creaky knees, but there’s nothing to beat the current seasonal sunny start amongst the celandines and sycamore seedlings – though we’d be sick-o’-more of those!

However late I may be getting back the night before, I like to start my new morning at home. I suppose I know where I am and can be ready for work with any new ideas that have struck in the night. We went to see the poet Lemn Sissay talking about what home is to him at a recording for his BBCRadio programme ‘Homecoming’ due later in May. Having been moved from pillar to post in the ‘care system’ all his young life he reached adulthood with little concept of home. During the wanderings of this particular performance he concluded that having tried many versions of it he realised that the essence of home is inside himself. He carried his at-homeness not as a snail does, on the outside, but as a heartbeat within. I was asked in an interview recently about where I made my first home – it was in a little wooden shed in my childhood garden, and more often than not wearing my red indian outfit. (I was one, to all intents and purposes) 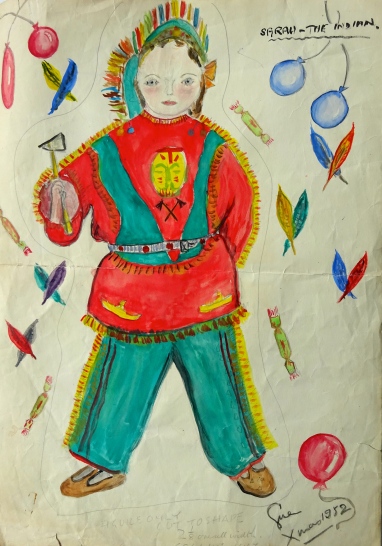 Before the great and exciting adventure to Guadalajara I’m packing my brushes and am off to Brooklyn for a few days painting and catching up at WestElm. They have a new studio down on the waterfront at Industry City, Sunset Park, and it’s Open Day at the weekend. So if any of you are in New York this Saturday 18th come by and say hello – it’d be lovely to see you there.

Thanks to Molly and Steve, and on behalf of the chair, to Alasdair Flint, Doug and Jim for humour and strong hands and to Joe for suggesting her name.

9 thoughts on “ideas with legs”