In London the bus is my favoured mode of transport – although it’s slow and subject to all sorts of traffic congestion, it’s easier for a chat and a share, and I like to see where I’m going.

I dislike the design of the interior downstairs – aisle far too steep, seats far too high up, vibrations far too affecting, but that’s by the bye. Some years ago I had an extraordinary encounter on the number 3 bus; recently I’ve had cause to reflect on how we humans be so what-we-are in such tiny but true ways – in a sort of stock cube essence of ourselves. The other day, coming home, I got on at the middle doors of a fairly full Routemaster. I looked to the left at the seats reserved for various needies; the window seat was available, but the aisle passenger wasn’t budging. A woman darted across, ushered the stubborn sitter up and showed me to my seat with a smile. I thanked her for organising us.

“What do you teach?”

“Well, I’m a teacher of well-being; I work in Care Centres throughout Lambeth.”

We chatted for the rest of our journey together. 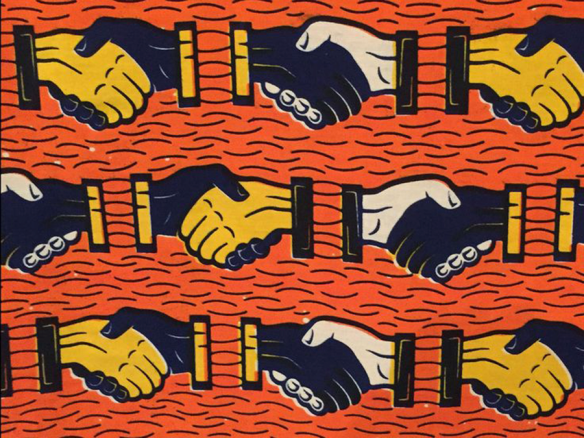 Centres…Lambeth… I’ve thought a lot about a recent little encounter I had one warm evening, approaching the Stockwell Centre in South London, as I walked from the tube to my car. A young woman of colour came out of the centre towards me – when she saw me her face lit up, it really did – a huge smile took over and with enormous excitement she pointed to my shell necklace, nodding vigorously and giving me all the thumbs up she could. I laughed, nodded back and said it’s beautiful isn’t it? Again the thumbs up, her eyes turning to the sky, the word yes was mouthed with a sigh – clearly she wasn’t a talker. I thanked her for telling me she loved it. I thought for a moment she was going to hug me with glee. It was such an electric connection just for those seconds. On the bus, again, I see a young blond woman; arrayed in a marigold orange and yellow sari she sits carefully and rather secretly takes something from her bag – turns out to be a bright orange carrot – the perfect snack for the outfit! And here comes a woman with raven hair, leopardskin jacket and spotted shoes bustling onboard in Brixton, negotiating her new market-fresh black-bristled leopard-print broom and a bulging zebra pattern shopper.

A mother, on such a crowded heat-wave-hot rush-hour bus, is struggling on with three little ones – one walking, one wheeled and one strapped to her front. The 2 younger children set up a wail, quite piercing and are in no mood to be consoled. People are restless. Finally an aisle seat becomes available for her, next to me; she whips the baby out of the sling and quickly and discreetly suckles it –

that wail subsiding she’s able to call across the gangway to the little pushchair person: “What happens to the wheels on the bus?” The child doesn’t want to play, but mum persists and gradually that child relents and obliges with answers – particularly happy when it comes to the babies on the bus – ‘wah wah wah’!  All three children are able to calm down and become contented. She speaks to them evenly, in Dutch, which is remarkably easy to understand.  I comment how brilliantly she’d kept her cool in such a hot and pressured situation.“You have to” says she – yes, but many of us don’t.

Rather different from the enormous woman who let the whole bus know that “As much as I love my li”le princess to bits, I ain’t talkin to ‘er at the moment”, and the so sad-looking man sitting motionless next his anxious wife, in contrast to a very cheeky-looking cyclist peering in at us as he slides through the traffic. And the little girl, abut 5 and new to the buses, asking her mum about every detail of what she could see around her; she came to the low-down blue ‘stop’ button: ”What’s that for?” her mum said she didn’t know, so I offered an explanation concerning seated passengers, particularly wheelchair users, and showed her the Braille too. “Well who invented that I wonder” she said – a very good question I thought.

I also like driving the car. There are a few weeks every year at the end of May, start of June, when the birds sit in the trees outside our block – maybe they’re concerned with nests and their contents – and of course they shit on the cars parked beneath. My car was so filthy I finally took it to the automatic carwash. I got a bit over-excited at the patterns made by the soap squirting on the windscreen, the yellow and green swishers, the fleeing drops of water pushed about by the dryer. I scrabbled for my camera and just about managed to catch the last of it all. I decided, unusually for me, to return ready to photograph the event properly. The following day I bought the Gold Wash Programme, drove in, settled down, got out the camera, and prepared myself rather smugly. Suddenly, shockingly, I was drenched in hot soapy water. I’d failed to close the passenger window! Panic! What to do? I had to turn the ignition key of course – it’s amazing how one can forget these essential details! I pressed the window button, wiped myself down with my hankie, and tried to restore my calm. But, the water being hot, the whole car steamed up and the windscreen view was obliterated! I did laugh at my desperate efforts to clear the window as I sweated in the mini-monsoon and hoped whatever detergent used wouldn’t bring me out in a rash!

So much for my plans – I got some very fine misty shots of the steamy interior… and all the while BBCRadio3 was broadcasting Jane Birkin discussing her Private Passions with Michael Berkeley – with her famously once-banned and breathless song ‘Je t’aime’ pushing up the temperature!

As you can see, the shell necklace has two faces – inside and outside so to speak;

I’m not sure whether one side encourages responses more than the other – I haven’t run a scientific trial. Perhaps the insides are more inviting, the smooth outsides cooler? Anyway, that shell necklace leads to many conversations in fact – a man with a Golden Key (the hotel concierge’s club) was very taken with it at a private view. It led, at the local craft shop, to a Saturday chat with a young woman about art foundation courses, to chance reminiscences about holidays, beaches, collecting. And to a little reflection on remembering sisters (the necklace was Susan’s) with the very nice lady behind the counter at The Sainsbury Centre for the Visual Arts in Norwich. This last came after a funny exchange concerning a lost hat. The cubicles in the ladies’ lav at the gallery are more like tiny rooms with their own washbasins and a shelf; it’s easy to make oneself at home, even for the shortest stay. I found a lone hat there, stuffed onto the ledge, and decided to take it to the front desk on my way out. As I approached, my ears just caught the words ‘mon chapeau’ and ‘trouve’. “Voila” said I, holding out the hat. The speaker was astonished –

Most satisfactory – and both the ladies behind the counter were very entertained too! 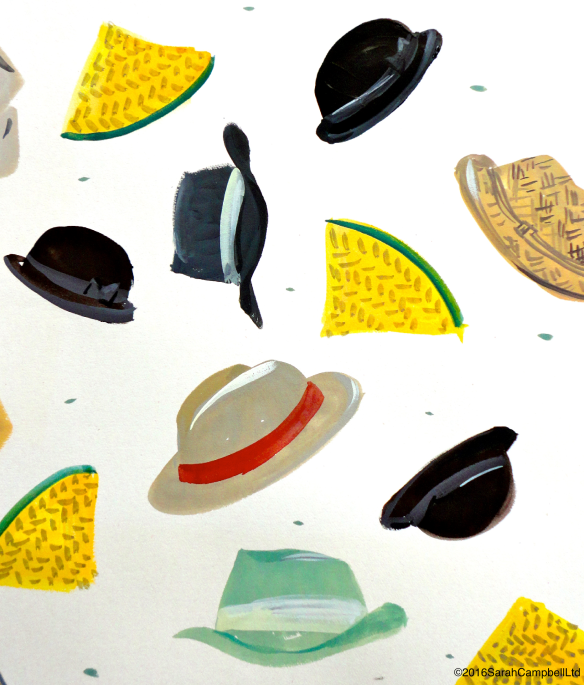 In a world that seems increasingly unmanageable, chaotic and scary these random little encounters keep me me-ish. Have you read ‘The President’s Hat’ by Antoine Laurain by the way? You may enjoy it…

This blog is in part about shared journeys, con- and di-verging; this picture is a good illustration of a shared but tacit decision about the route to take – not necessarily the one prescribed – this phenomenon is called the ‘desire path’.

On a business note, we have some new bags and scarves, new product for gentlemen, new fabrics and new courses and workshops for everyone – all available to see on my website. Don’t be surprised to get a newsletter about it all soon…. 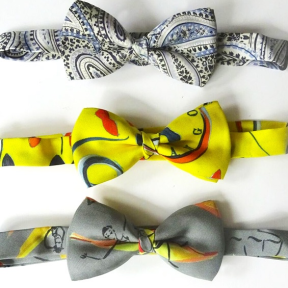 Thanks to Jose, Joe and Rohan

Some of the new designs in our Kashmir Gardens collection, arriving any minute at Michael Miller Fabrics…