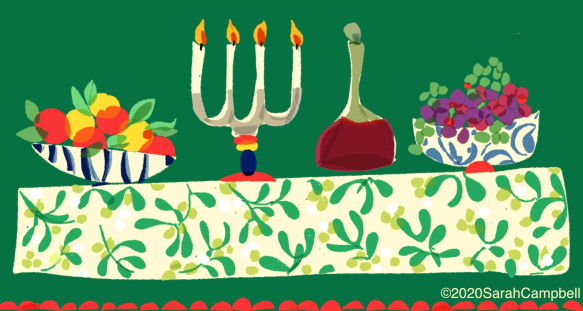 Usually, on an early december weekend I’d be taking part in both the Selvedge winter fair in town and the Open House studio sale event run by a generous and enterprising group of friends in Balham. Christmas shopping would have begun, and new treasures and treats would have been on their way to sit under trees and in stockings. 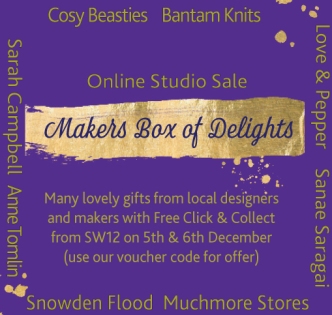 This year, unsurprisingly, things are different: for one thing, OpenHouse is now happening in the form of an online sale and an on-the-doorstep click-and-collect service! Order from any of the participants shown here and your goods, plus a festive mince pie, will be collectable,10 – 4, from our Open House front door in SW12 on the weekend of 5/6 december. Order anything from me and you’ll receive a 10% discount across the board instead of being charged postage. The code you need to apply is MAKERSBOXOFDELIGHTS20 and the offer runs until 22.00 on December 4. Remember to enter it at the checkout, and put Balham SW12 in the ship-to address box too: the exact location for you to pick up your items will be sent when your order pings in.All other orders will be processed in the usual way – with thanks as ever to the Post Office.

Alongside these new cards the online shop is full of many old favourites – scarves, cards, printed cushions, fat quarters, plus a new page of handbound stationery – note books, sketchbooks, refillable sticky-note binders – unique hand-painted cushions (which will be replaced with new as they sell), two new little groups of hand-made art dolls and these four lively A2 giclee prints for your walls. Each is taken from a flower painting in gouache, and printed expertly on Hahnemuhle paper.

And of course there’s the calendar for 2021 too. The months in the calendar are each illustrated with designs painted directly onto fabric – work I’ve done this year, much of it during the first long lockdown. I struggled for a while with the title, and the cover itself, finding it hard to envisage that another year like this one might be approaching us. I tried different names and painted three versions – nothing was quite right. The day the invention of an efficacious vaccine was announced I caught a little optimistic glimpse of the coming months, and the title made itself clear – ‘Next Year’. And, having been scolded by several customers for omiting them last year, the Special Day stickers are once again included! I hope ‘Next Year’ will help you will enjoy … next year. Here’s a very quick look: 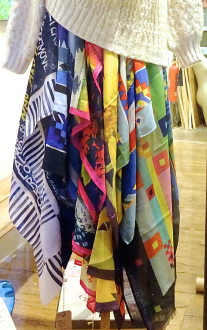 We managed to squeeze in most of my allotted weeks at Anthropologie Kings Road before the new lockdown – only the last few but important days were curtailed by the latest country-wide restrictions. Some of the Painted Treasures remain on show in the windows of the gallery until the end of this month, so have a peak in if you’re passing.

Although Zoom has often been the contact corridor of choice this year, apart from a couple of meetings I haven’t had a lot to do with it – until this last weekend. Invited by Selvedge magazine to run a virtual fabric painting workshop, I agreed, rather trepidaciously. We decided that two afternoons of three hours each would serve us all better than the usual one full day, and might accommodate some overseas students too.

The matter of how to manage the vertical – talk – and the horizontal – demonstration – exercised me, having neither any very sophisticated equipment to hand nor much natural know-how. But with some help, a new little web-cam, a borrowed tripod and some parcel tape I set up quite an elegant Heath Robinson arrangement. I think it worked pretty well,  but I’ve still got a lot to learn.

And with students from California, Seattle, UK, Germany and Dubai it illustrated the merits of the whole worldwide zoomery system, and the global community of fabric lovers.

The idea that as our sun goes down here it’s rising on the West Coast of America fills me with a childish excitement, certainty and optimism. Maybe that is misplaced, given the shocking political situation we’ve been experiencing lately and the rather horrible thought that so many people choose, and apparently enjoy, to be governed by bullies, liars and thieves. Perhaps ’twas ever thus, but it seems so very much more prevalent at the moment. My brother’s latest blog gives a personal account of how appallingly institutions can behave, both in their actions and their subsequent dealings; it should be read. Let’s work towards the pendulum swinging towards fairer, kinder, more meaningful and more intelligent; I’d rather wave goodbye to a happier planet when I finally exit. 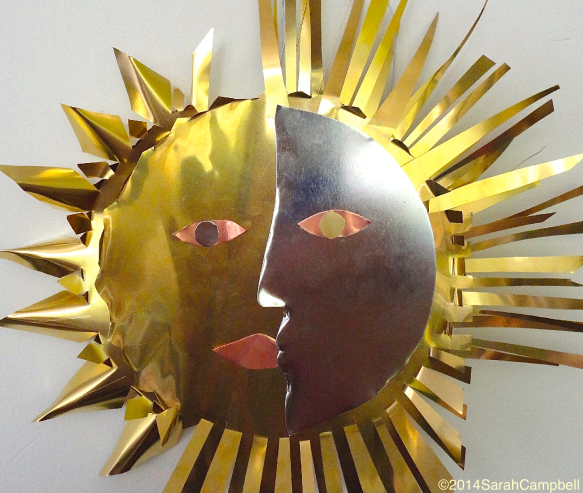 I was rather pleased to see an instagram post from Dubai featuring some more of the ceramic cats and dogs mugs that I designed for West Elm. Some of the original sketches appear in my Dailies book – the daily visual journal of 2019 – showing they were painted

last August. Around the same time I also painted some tiny skiers, which are even now slaleming across West Elm’s new cushions, cups and plates, plus one or two other seasonal delights – rather sweet embroidered cushions – which may yet make an appearance. My Spot the Dog cushion was quite popular amongst the dog-lovers of Chelsea; one customer sent me a pic of Spot and her own dog making hay in bed together…

Despite this very uncertain and unpredictable year, I’m fortunate to have quite a tempting feast of possible and planned new work on the horizon at the moment – designing, painting, licensing, writing – but disclosing all the exciting details will have to wait a little longer: chickens, eggs, hatching etc…. 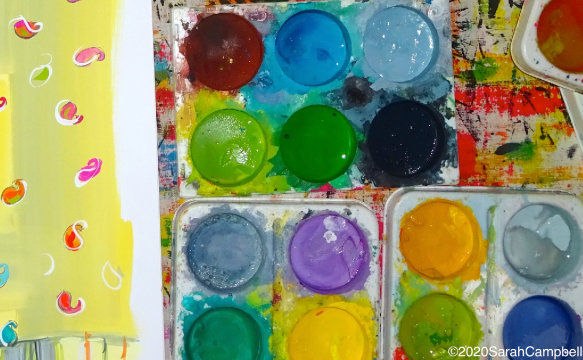 But one thing I can tell you is that the biography of my mum is now due to be published: the contract has been signed, so bar any disasters we’ll be seeing it next spring! ‘The Performer’s Tale: The Nine Lives of Patience Collier’ is brilliantly written by Vanessa Morton, with a foreword by Penelope Wilton, published by Appollo, and elegantly designed by Alastair Campbell. Patience was definitely a force to be reckoned with – not an easy mother to have, but funny, courageous, broadminded, exacting, meticulous. Her story, both personal and professional, reflects the great changes of the 20th century – for society, women, families, politics, theatre. There are lots of fascinating pictures too!

That’s enough about shopping for the moment. Sitting at Anthropologie sometimes gave me moments to doodle and draw. I got quite involved, over several days, with this funny little run of patterns – watching the passers-by.  Toodle pip!