The two little boys were furious with each other!  Amidst shouting and tears the game of Snakes and Ladders was disintegrating into war in the next room. I was painting. Mr 4-years stomped into the studio and vigorously drew marks across the middle of the long strip of paper taped onto their side of the table.“That’s the wall” he announced “and he can’t come into my half.” He wrote his name plus the word ‘only’ and started to draw his garden.

Mr 6-years followed. “You can’t come in my part.” “I don’t want to and you can’t come in mine. I hate you, you can never come in, never.” They both worked away, goading, insulting and bettering one another. Mr 6 elaborated his estate and drew a mansion with seven, no, eight windows; Mr 4 looked on longingly: “I can’t draw one like that.” Mr 6 couldn’t resist: “Shall I draw one for you?” adding carefully “– just as a job.” “….ok.”

“How many windows do you want?” 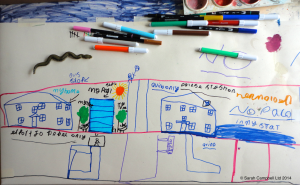 Slowly the jostling hostilities had subsided. When the house was drawn Mr 4 considered its size and then asked “Would you like to come over and stay with me here?” “Yes, and can I bring Oliver with me?” “Yes, and you can swim in my pool too.” Brotherly love and harmony were restored once again, peace was made: the pens were mightier than the swords. Oh, if only….

On my side of the table I was working on the painted sketch for a mural I was planning. Later in the week I packed it up, together with my brushes, empty yoghurt pots, pencil, string and a brass weight, and set off for a friend’s basement courtyard in Notting Hill. The last two items were my plumbline – the painting was composed of vertical stripes. A blank area 7′ by 10′ is quite a daunting prospect, as is transposing a smallish sketch. But the string/stripe method worked and gradually the wall was transformed; by the end of the day, and after a lot of hopping up and down the stepladder the painting was completed. I felt quite pleased with myself, and I think the friend is happy too.

All those ladder steps helped considerably towards my 10,000 paces that day. So far my total raised for the Walk in Her Shoes campaign has easily exceeded my first goal of £100. So thank you to all who’ve already donated – and please, others, do give something here, however small. Imagine having to trudge more than five miles each day just to fetch water home – no indoor tap for the turning, no domestic well to be drawn from, no assurance that you’ll return safely – let’s aim to change things for the better for all those women and girls, to give them and their families a decent alternative. I’m enjoying my walks despite my legs groaning at me a bit, but I have the luxury of choice. 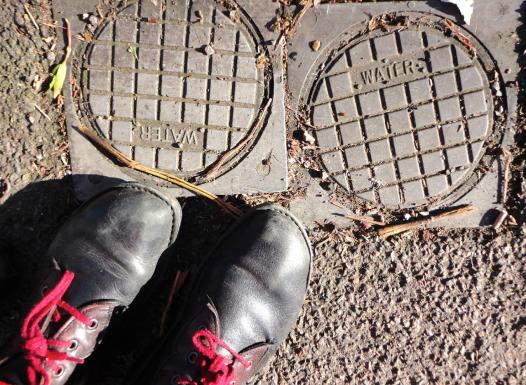 And it turned out that I covered a couple of miles at the FTM last week. Quite an unexpected last-minute invitation to run a collage workshop there came my way and I was very pleased, if a tad nervous, to accept. A lot of glue and scissors were set out and great piles of assorted papers, fabrics, materials, magazines were provided; the thirty students promptly arrived. 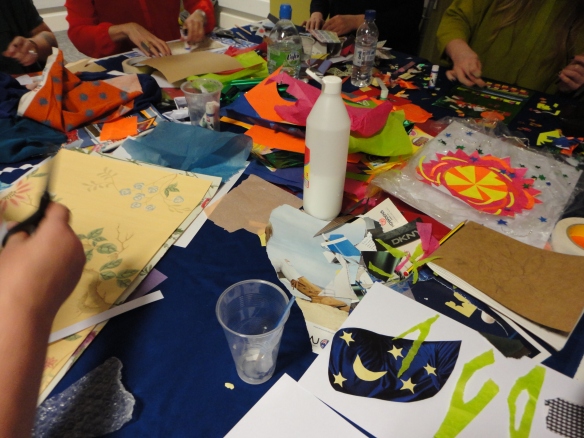 After a little jabber and a little shyness all round work began and that special sound of concentration – silence – descended. Then quite soon the atmosphere was buzzing and thirty different constructions began to emerge from the apparent chaos on the tables. It was most exciting watching the pictures come to life, seeing all the surprisingly different methods and inventive juxtapositions. Thanks for the opportunity, FTM, and for the particular and invaluable assistance of Uthra; and who’d have thought the charity’s  pedometer would clock up more than 4000 steps in all that afternoon?

Afterwards I popped into the Morley College Gallery to see what their textiles department’s been up to. Lots of interesting things there too, especially the work done in collaboration with the Garden Museum around the theme of the Great War. I’m very much looking forward to teaching a couple of day courses there next spring.

On the allotment the sun has brought out the little strawberry flowers with the promise of sweetness to come. And I love the fun of the straight canes making such wiggly shadows on the corrugated iron fence – makes me think of Charlie Chaplin as the tramp wobbling along with his walking stick – take a look. 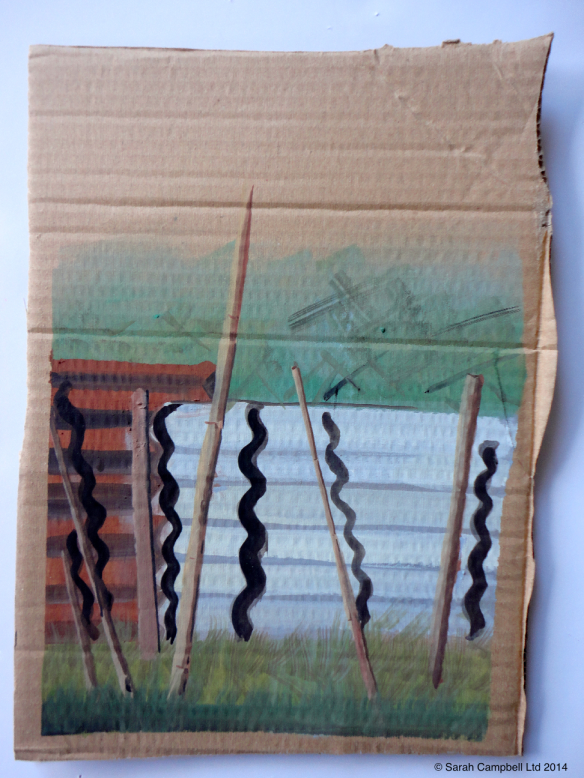 At home the central heating has been mended and deep inside the airing cupboard the engineer made a new tin duct secured with a very fetching fancy fringe. It’s completely obscured from view now by the new gas unit, but I’m glad to know it’s there. In between times I’ve been busy making some new cards – the vintage fabric variety. Along with the mainly reds and mainly blues a new set of dramatic blacks have been taking shape; each one a different little composition – my own personal collage workshop, accompanied by the radio and sitting down – lovely! 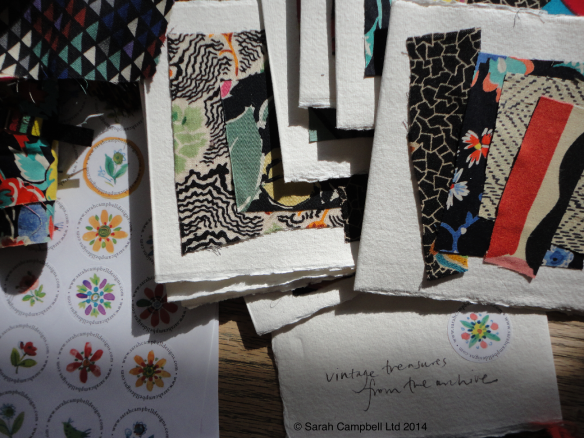 Thanks to Alan, Molly and Rajet for the collage photos

10 thoughts on “drawing the line”